All are welcome to attend our monthly Saturday morning workshops facilitated by the Wordsworth Trust.

Saturday 7th March  11am to 12noon  at The Old Courthouse, Shap

This FREE 60 minute workshop will be led by playwright Joyce Branagh who will share the process of research and writing behind Ladies That Bus.  It will be an interactive session, where participants will be encouraged to write a short piece of dramatic writing during the session.

Ladies that Bus is a new comedy drama which will be performed at Orton Market Hall on Saturday 7th March 7.30pm   tel.  015396 24732 to book ticket or www.highlightsnorth.co.uk

FREE Complimentary transport from Shap to Orton and return with Cumbria Class Coaches.  Departs from The Old Courthouse, Shap at 6.45pm tel 01931 716273 to reserve a place. 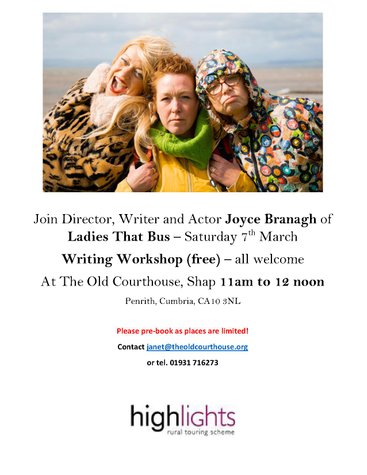 Join us to listen to recordings of well known poets and to poetry written by present day poets from our area. 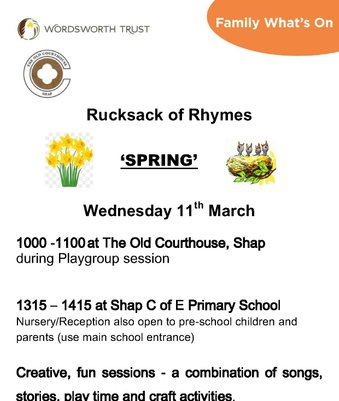 Peter Michael Rowan has a little of John Renbourn and Tom Paxton about him but not nearly enough to overshadow his own obvious talent. Expect and evening of new and little-known acoustic gems interspersed with the best of Simon & Garfunkel, Cat Stevens and others

Book via our website www.theoldcourthouse.org or tickets can be purchased in advance at The Old Courthouse

Please - Nothing larger than a TV - kitchenware, clothes, books, toys, pictures, small and safe electricals, ornaments and garden or

DIY tools will be just fine. ENTRY IS FREE - but donations to The Old Courthouse very welcome!  Tea/coffee/snacks available

If it’s broken don’t bin it – fix it!  Our volunteers will try to help you repair it if possible.

Drop in for a chat over tea, coffee and cake.