For more information on the Fell Pony Society events, scroll down the page to the event poster. 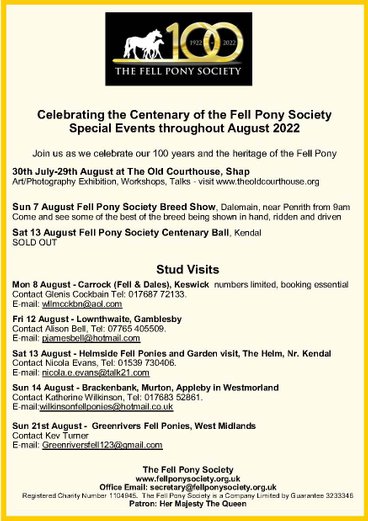 The Making of the Centenary Book

Greenholme author Sue Millard's award-winning book HOOFPRINTS IN EDEN now has a successor, A CENTURY OF FELLS.  This new book is dedicated to HM Queen Elizabeth, and celebrates her Jubilee as well as the Society's Centenary. It uses sequences of vintage and modern photographs of many families of these hardy ponies to show how the breed developed over the past hundred years, and considers how it may develop in the next century in the face of current trends in agricultural policies. Sue's other works published by Jackdaw E Books include 6 novels, 2 collections of short stories, a book of cartoons and 3 collections of poetry. She is the Editor of the Fell Pony Society magazine, Manager of the Society's web site, and has served on the FPS Council since 2005.

In the 1970s and 1980s Barbara and her sister Nancy together with their parents Jim and Frances Bell attended many shows with their Waverhead ponies and enjoyed consistent success. Barbara has kept the stud going with help from her niece, Hilary.  She is a past President and Council member of the Fell Pony Society.

Sarah Charlton has had long term family involvement with Fell ponies through the Linnel stud, one of the oldest Fell pony studs, certainly the oldest outside Cumberland.  Her grandfather in law Roy B Charlton (Grandpa Roy) was present at the inaugural meeting of the Fell Pony Society in October 1922.  She is a present Council member and her late husband was past Chairman and President. Now her the 5th generation of the family is involve with the breed.

Clive was honorary secretary/treasurer of the FPS for ten years. He is a panel judge for the Fell Pony Society, the National Pony Society Mountain & Moorland, British Show Pony Society, Coloured Horse and New Forest , to name a few.  He has researched and written about the breed including breed books. Having shown ponies for many years Clive has now quietly retired from it all. 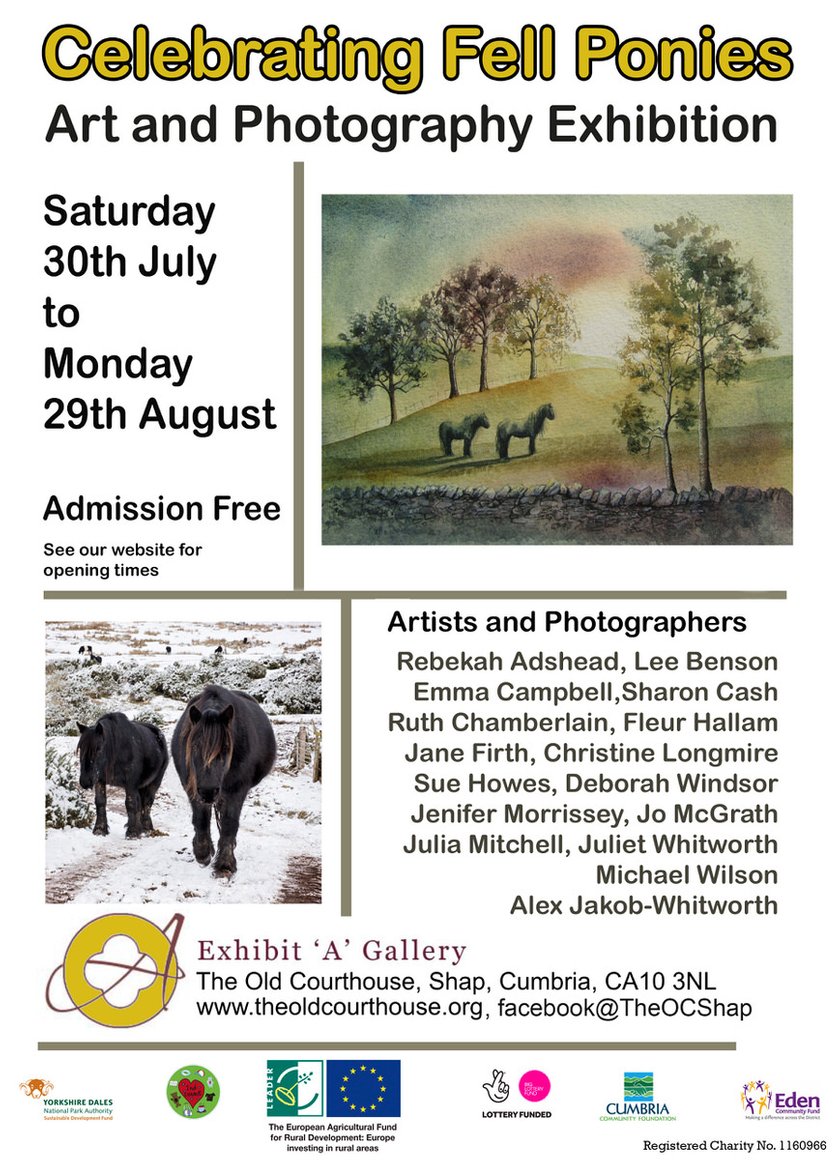 Double-click here to add your own text.

Things to bring for your needle felting workshop

‘Hints and Tips for taking a Photo of your Pet’

If you are bringing a picture of your own pony try to bring one without too much forelock/mane covering the head – more hair can be added later!

NB: Jane will have a small selection of photocopies of animal images available for you to use on the day should your own image not be suitable.

Some people find that a few close up/blown up photocopies of say the eyes, nose or mouth helpful to provide more detail.  It’s up to you.

A phone or iPad with images on can also be helpful but you must still bring the 2 x photocopies as mentioned above as these are used in the transfer process.

The ‘Taking a photo of your pet’ sheet provides examples and tips for taking a good animal photo, if needed.  Click here to download.

Provided for you to keep and take home

The following equipment & materials will be provided for you:

A selection of 100% real Wool fibres

A foam mat as a working surface,

Hessian fabric for your background

NB: £15 is payable directly to the tutor on the day for the items above. 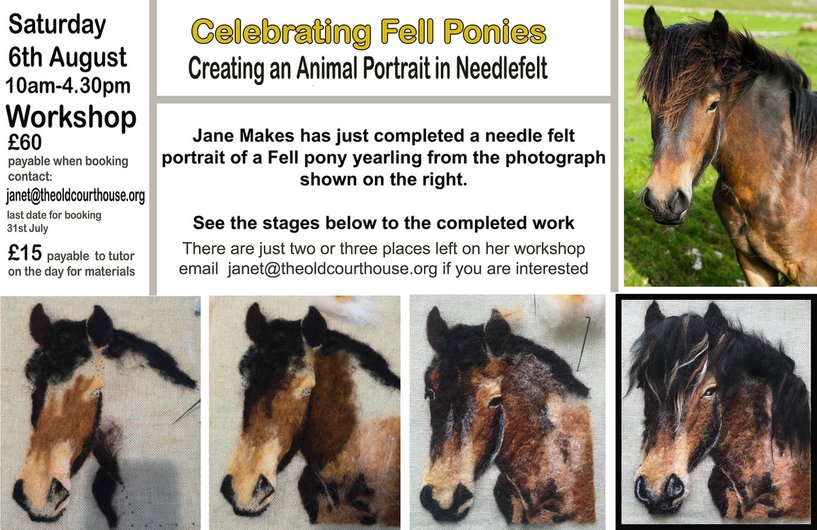 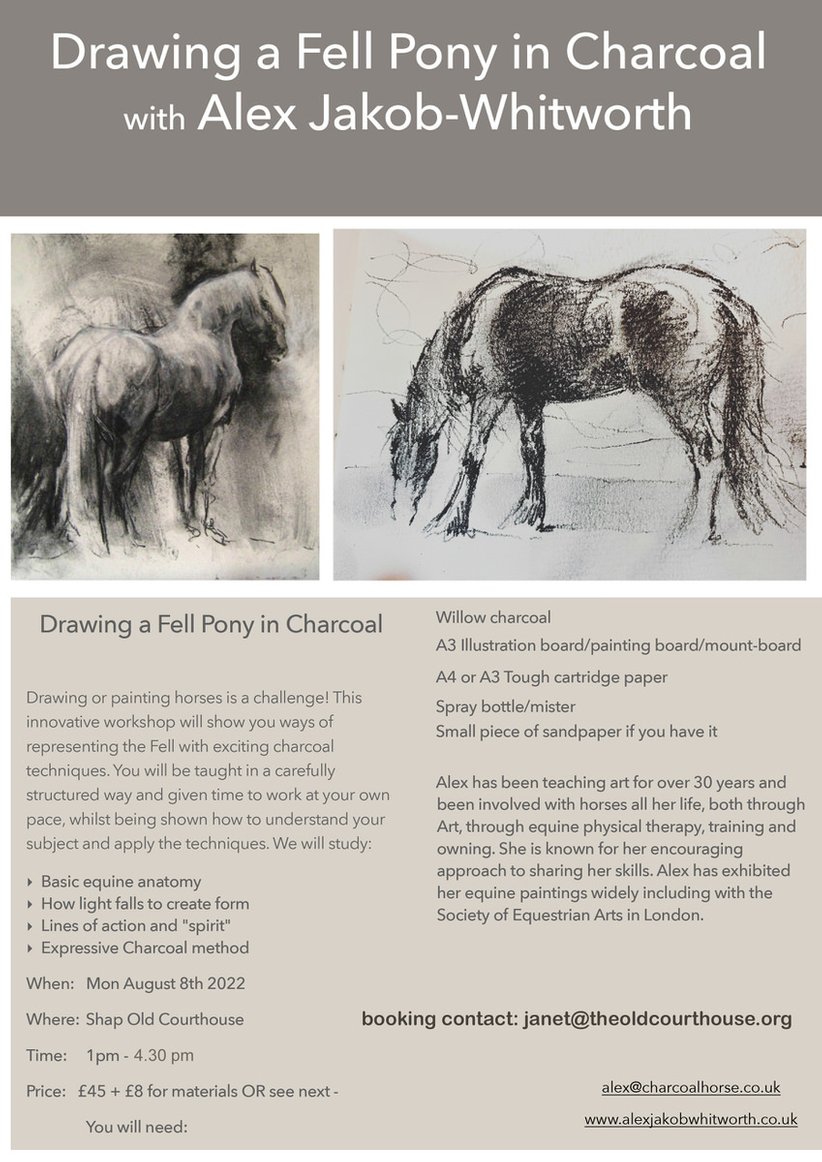 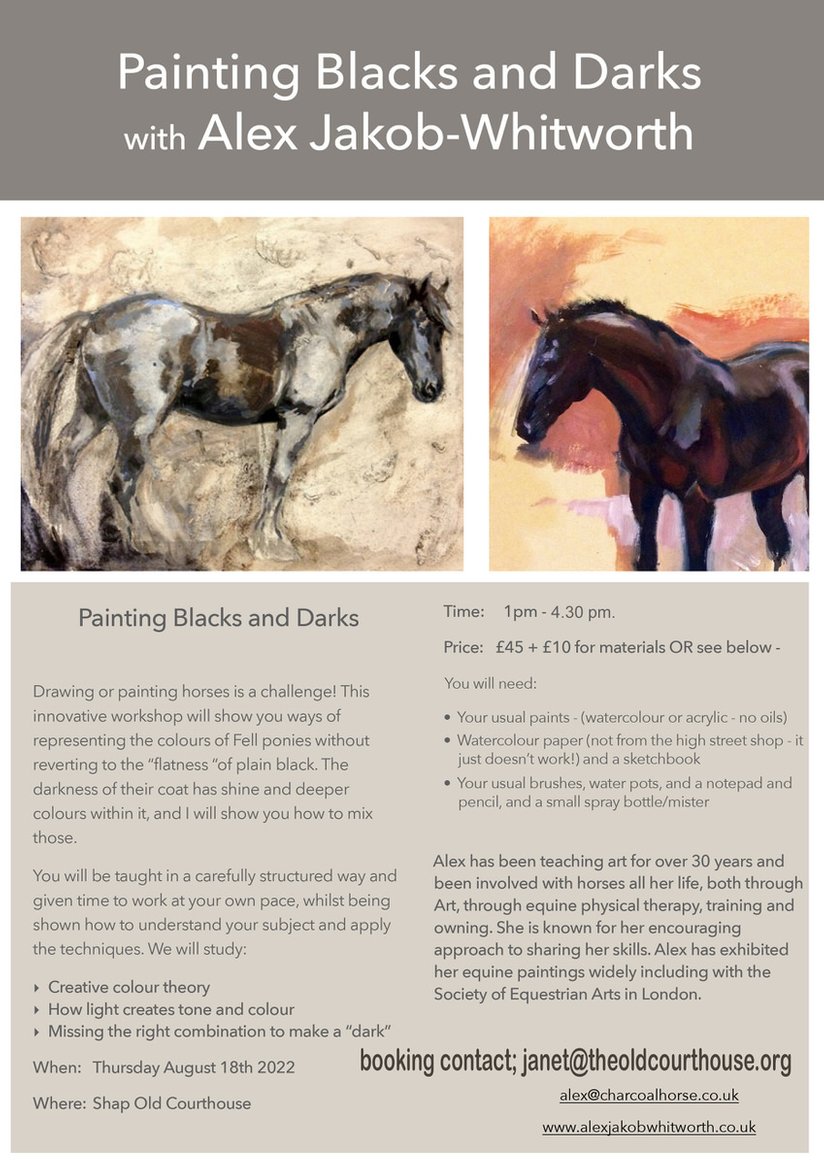 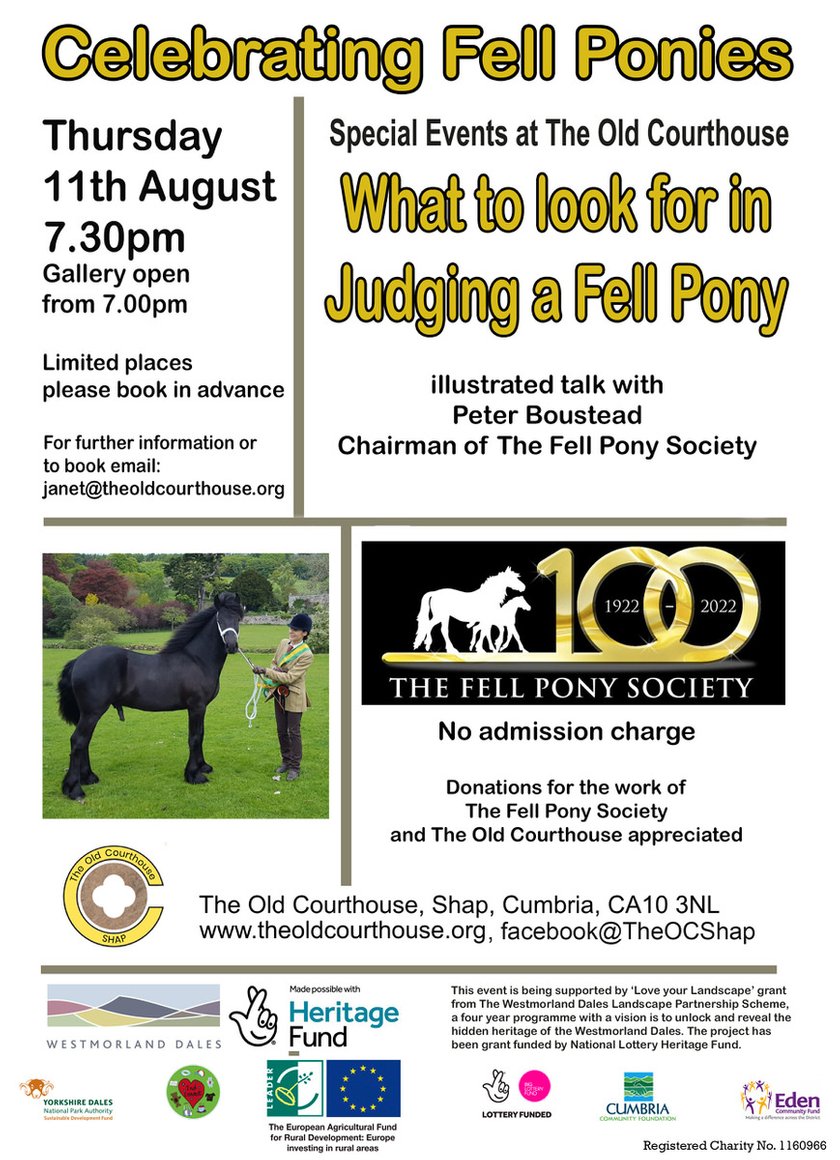 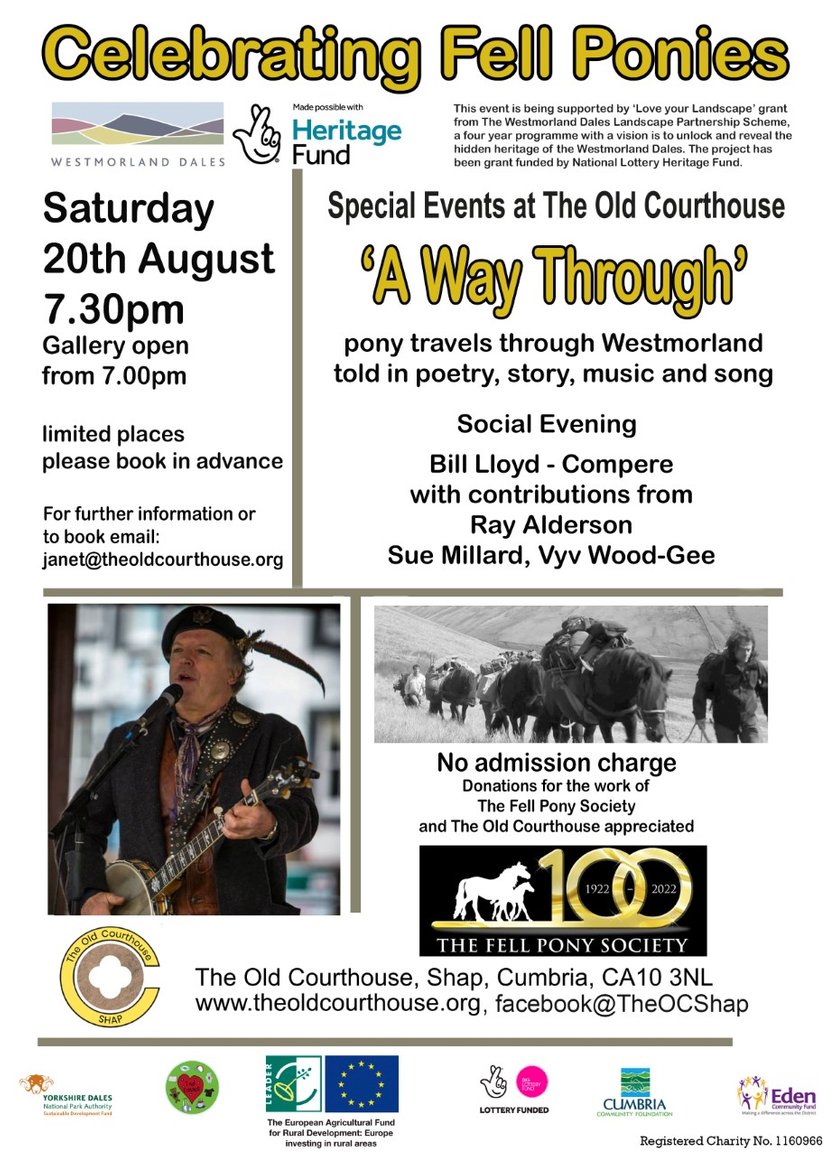 ‘A Way Through’ exhibition at The Old Courthouse, Shap 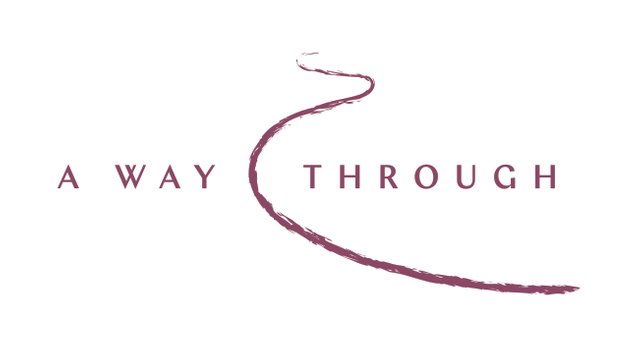 The Westmorland Dales is bounded on all sides by major through-routes - the Lune gap; the Eden valley and east to west through Ravenstonedale to Kirkby Stephen. In between there are miles of lanes and paths. For thousands of years, people and their animals have used these ways through the landscape and they have all left their mark. The ‘A Way Through’ project aims to explore the history of these routes and of the people who travelled them and to share their stories with the wider public.

Shap is one of the villages the project has been investigating. The arrival of the M6 removed all but local traffic from the village. Before then, the A6 was a major north-south route, mostly following the line of the eighteenth century turnpike to Kendal and beyond. These roads brought money and jobs to the village as did the Lancaster and Carlisle Railway line opened in 1846. But Shap has a much older history of travel and the prosperity it brings. This exhibition at The Old Courthouse will explore some of these fascinating stories from the Neolithic to the Victorian era.

Read more about ‘A Way Through’ on the project blog https://www.yorkshiredales.org.uk/a-way-through